A small act of kindness could mean the whole world for someone in need of help. Thanks to these fishermen brave gesture, a wounded bald eagle gets a second chance to life!

Peter Dick works as a fishing guide and a regular day at the office for him, means a new adventure. However, nothing compares with the experience he had on the Cowichan River. Peter was in the boat with one of his colleagues on the fast flowing river, when spotted an eagle on the river banks. It didn’t seemed to be anything wrong, but only when they got closer they realized the majestic bird is actually in big troubles. The massive bird was unable to fly as its right wing was broken. Scared and confused, the eagle started to run away when Peter approached it. However, the fisherman’s intentions were but good. But even so, the eagle kept running with Peter carefully chasing it. 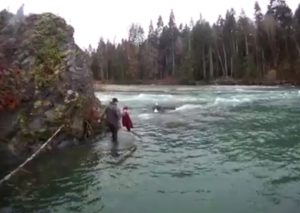 Finally after a dramatic rescue through the river rocky banks, the kind guy has managed to capture the poor bird. His colleague who was fallowing them by boat, helped them both to get on. As the weather was getting worse, the two fishermen and the rescued bird headed to onshore, where helps were waiting them. 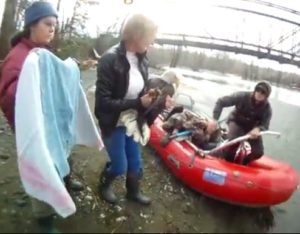 “During a drift down the Cowichan river we came across an injured Bald Eagle on the beach,” Rambling Fishermen website reads. “Guide Peter Dick managed to capture it and we called Pacific Northwest Raptors to come and meet us at the bottom of the river. The Eagle was totally calm while being held and transported.”

After a vet fixed its wing, the eagle named “Cowi” was taken to a rehabilitation center where it would stay until it fully recovers. “We are just glad that there are people like the Pacific Northwest Raptors that care enough to help wounded animals like this beautiful Bald Eagle,” Ramping Fishermen also wrote.” [We] hope “Cowi” heals up and can be released into the wild once again.”